The inaugural event to be held on Thursday 12 October at Hudson’s Wedding Venue & Restaurant in Stellenbosch is aimed at generating much needed funds for the Animal Anti-Cruelty League Cape Town (AACL). The event will offer guests a complimentary glass of bubbly on arrival as well as a decadent three course meal prepared by Hudson’s dedicated chefs.

In addition to the food the event boasts an art exhibition, an auction and a performance from the local Bottomless Coffee Band. The Capetonian band, consisting of husband and wife duo, Lourens and Esté Rabé, are described as, “acoustic folk-rock and afro-blues.” The couple prefer, “…to refer to it as gourmet music.”

All proceeds from the evening will go to the AACL and this is one of the reasons that Hudson’s owner, Barry Eason, decided to step in. “When we heard that some funds were needed we did not hesitate to jump in and help. We opted to offer the venue as well as the three course meal at no charge.” The venue, one of the finalists in this year’s Top Vendor Wedding Awards, is set in the picturesque winelands of the Western Cape, a cost that the AACL could not incur. Donations are the lifeblood of the AACL, “We do not get funding from the South African government neither local nor central and rely only on the generosity of public support.”

The AACL has been in operation since 1956 and is the second largest independent animal welfare organisation in South Africa. Funds generated or received by donors are used to provide shelter, food, veterinary care, prosecute animal cruelty cases and promote adoption programmes. There are currently six main centres across South Africa’s major population centres and the AACL deals with hundreds of cases each week.

To support the AACL and the Applause for Paws initiative you can make a donation here http://www.aacl.co.za/donate/ or purchase a ticket to the event at only R350.

Ticket sales and bookings can be made through the AACL by contacting Maryke on 021 534 6426/7 or via email info@aacl-ct.co.za

To secure your ticket please make payment via EFT using reference GALA_SURNAME to: 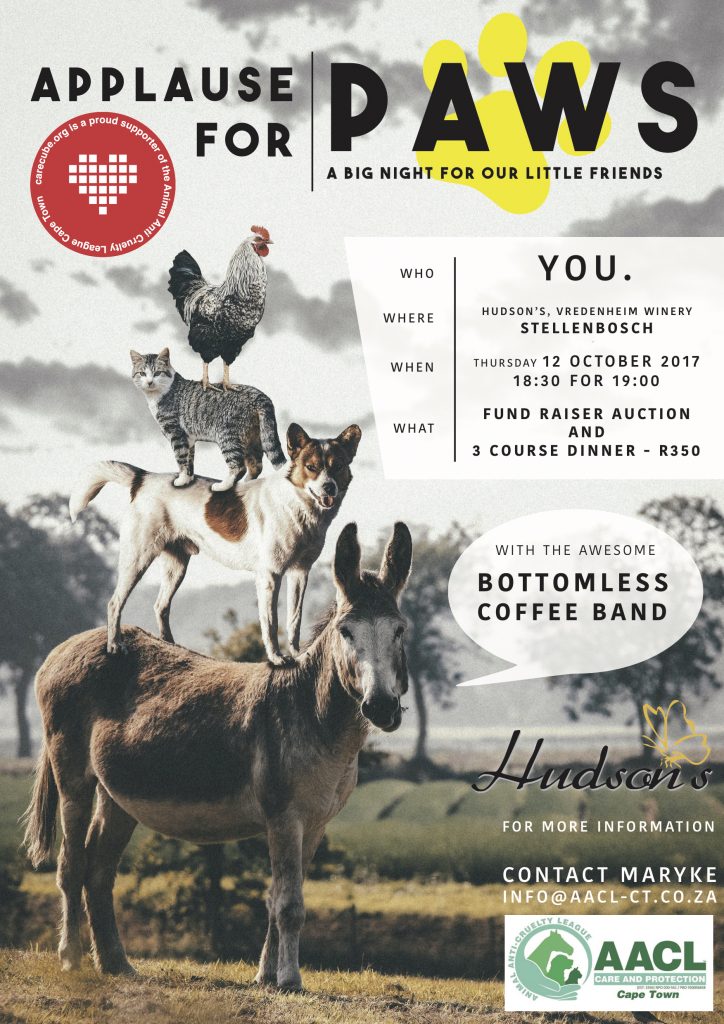 Paws through the vine dog walk
May 12, 2017
Leave Comment